MOSAIC SYRIA: Another Actor in the Anti-Syria War Propaganda Theatre 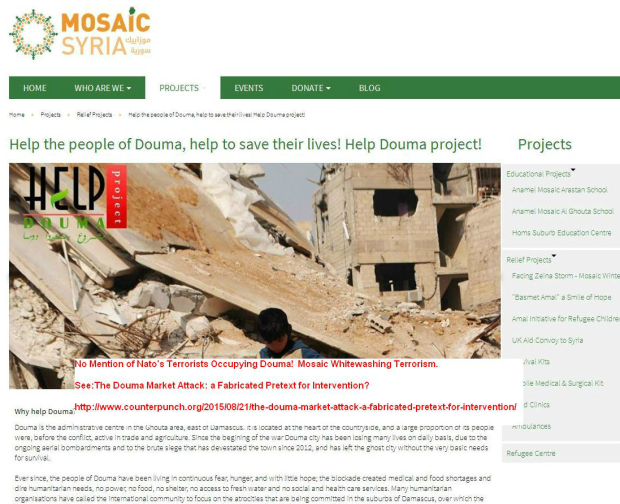 In recent months, the propaganda of the UK/US-backed White Helmets has been revealed again and again; their credibility has long been shattered. Yet, unsurprisingly, the HR industry continues to endorse WH’s staged propaganda.

In Nov 2014, the WH alliance created an animation video to further try to put forth the fairytale that they are “civilians” assisting “civilians” being bombed by the “regime”. The sheer, slick but obvious propaganda elements of the video aside, who are some of the key people involved in this propaganda piece?

Who and where is Amjad Wardeh? According to his profile, he is a Syrian “is currently practicing art in Istanbul.” According to a June 2014 article on Wardeh, he has lived in Instabul since early 2013.

Interestingly, Wardeh has made prior propaganda…

I am a retired teacher who is interested in human rights, social justice, freedom of expression, and believe it is absolutely essential to have a free press for a fully functioning democracy.
View all posts by sand49 →
This entry was posted in Uncategorized. Bookmark the permalink.